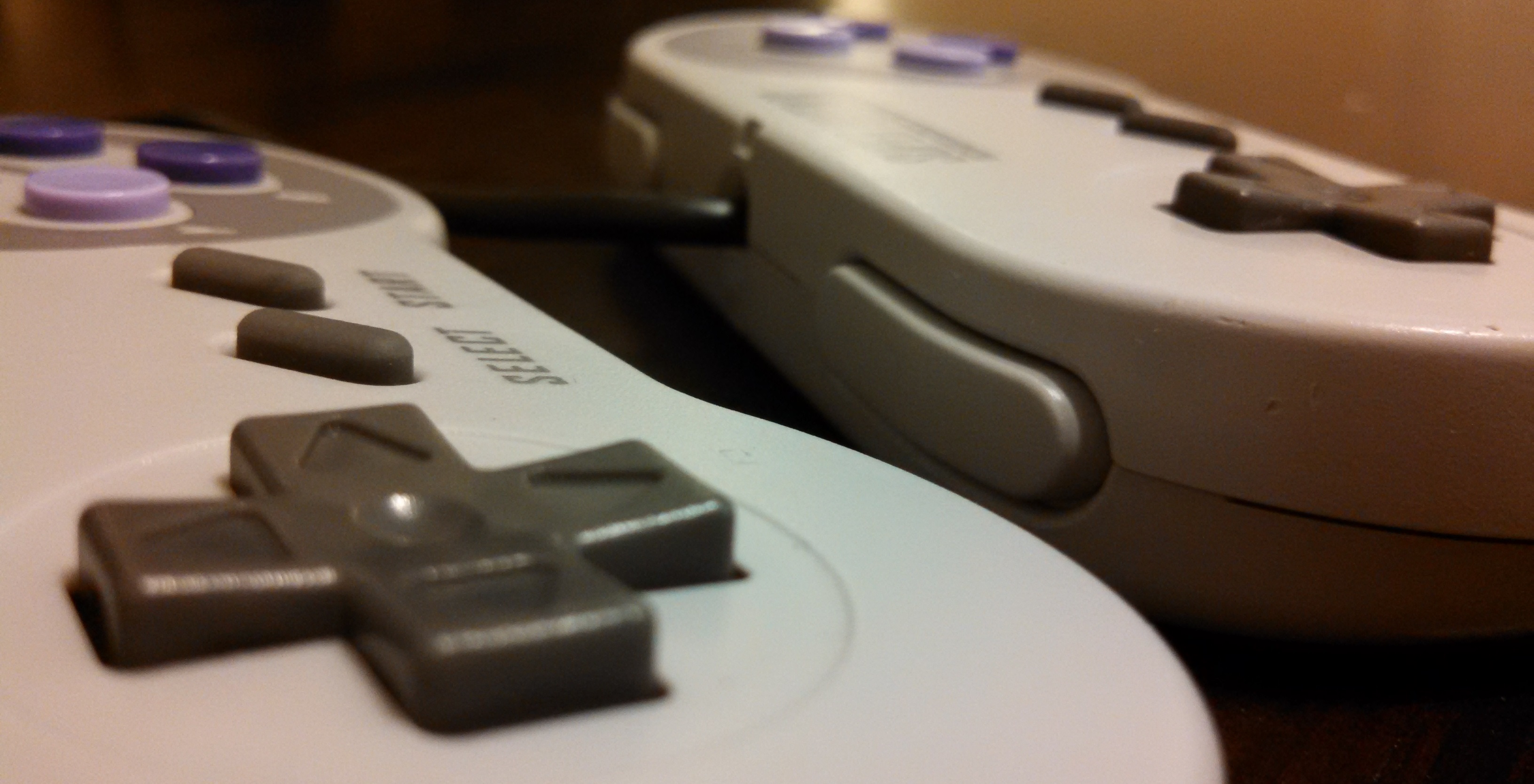 Thank you all for reading this review here! If you’d like more gaming-centric articles and reviews and even some really dumb satire, head on over to my dedicated game and media site, The Avalanche Rebels. All of my gaming articles from my personal blog here have been moved over there, and there’s a bunch of new stuff there to look through. Enjoy!

It started innocently enough. I saw that Hyperkin posted a video review for the CirKA SNES controller on Facebook and after watching it, I was intrigued. I had to look more into it.

As any Super Nintendo aficionado knows, finding working original Nintendo-made controllers can be a bit of a pain. It’s even harder to find them in good condition. For a console with such an enormous library and such a long lifespan, it’s amazing that only seventeen years after its last official game released, so few original controllers survived. Sure, there are tons of third party and after-market options, but as we’ve all experienced, it’s hard to find any that feel as great or work as great as the original controllers Nintendo stopped printing so few years ago.

I, myself, have been subjected to disappointment in the hunt. I’ve had many third party controllers over the years from many different brands, and I’ve never found one that works or feels quite as nice as the original two controllers that came with my Super NES. Only two years or so ago I tried again, with an after-market ‘clone’ controller that resembles the original, only to once again be disappointed. Naturally, I was very hesitant and cautiously pessimistic about this CirKA controller. The video review I watched, produced by Hyperkin, could have been embellishing the truth for all I knew.

In much shorter words, I replied to that post on Facebook voicing my concerns, but Hyperkin stood by it and told me I wouldn’t be disappointed again. With that level of confidence in a product that, by default, has a disbelieving audience, I went to Amazon and plunked the $12 down. At least it wasn’t an unbearable bar of entry.

The Amazon reviews left me with mixed impressions. Most said the controller was nice, and like the original in every way. Others complained about latency issues and stiff buttons. Not many reviews seemed to discuss the issues that had plagued me with after-market controllers in recent years.

Of my concerns, the biggest was surrounding the D-pad. A common problem in after-market and even third party controllers during the console’s lifespan was that a poorly designed directional pad would be able to be pressed down in the center, hitting all four directions at once. This made games like Mario damn near impossible. Pressing down in the center of the pad would make Mario skid backwards. While good for a laugh, it made the controller useless.

Even some of the best unofficial controllers I’ve used were plagued by this issue. The Retro Duo Portable originally came with two controllers that had a unique design that was praised by critics upon the device’s release, and I really liked them myself, but they were also affected by a strange D-pad and membrane scenario. For example, you could not press straight down. On a game like Yoshi’s Island, jumping to do a ground pound would have you pounding down towards the right, not center. This affected both controllers, and even a third one I bought from the same company that was wireless.

So naturally, when I got the CirKA controller yesterday in the mail and unboxed it, my heart sank when I gave it the initial D-pad press test. It pressed in on the dead center slightly, but luckily did not allow for all four directions to be pressed at once. I immediately grabbed one of my well-worn original Nintendo controllers and did the same thing to find the same result. Aside from the D-pad on the new one being more stiff for its age, it behaved exactly like the original. Immediately my fears were gone, but I lay a seed of cautious optimism in my mind when I grabbed Super Mario All-Stars to test it out for sure, live on Twitch.

The results were wonderful. The D-pad not only prevented Mario from skidding around, it responded exactly like the original. All of my D-pad fears were laid to rest.

The form factor of the CirKA controller is also remarkably high quality for a replica. The plastic for the shell is hard while the plastic for the buttons is a tad on the soft side, but it feels sturdy throughout. The brand new membranes beneath feel a bit stiff, but that stiffness also provides a peace-of-mind button press, much like the modern Nintendo controller feedback you’d find on the Wii U Gamepad or even the 3DS. These will obviously wear down in time, but I’m confident that, as long as the membrane doesn’t tear, they will age similarly to the official Nintendo controllers and still respond twenty years from now. The face buttons have a softer plastic than the original. It’s not ‘too’ soft, as most of us are familiar with on other after-market controllers, but noticeably soft nonetheless. The concave and convex curvature we in North America are used to are present, but not as strongly defined as on the original controller. It still feels natural and normal in the hands of a Super Nintendo veteran, but it is a noticeable difference. The curvature is at a softer degree than the official controllers. Nothing bad, I just feel its worth mentioning as that is something many people look for in these controllers.

The triggers were my next point of concern during the live-streamed playtest of the controller on Twitch. Star Fox on the SNES is one of my favorite games of all time, and barrel-rolling is a key strategic element when making your way to Venom to stop the mad scientist Andross, so it is vital to my mission that the triggers be responsive and tactile. The triggers on the CirKA controller are more on the squishy side, which may disappoint some people, but they are only *slightly* squishier than the official controller. This is not to say they hurt the mission, though. The slightly softer triggers still depressed with a satisfying push, 98% as satisfying as the original. The response of the button press translating to the game on screen, however, was 100%. Every angled turn, every twist down a narrow bath, and every roll to deflect oncoming fire from hostiles happened as expected. To this end, the triggers were successful in completing my mission and returning home to Corneria unscathed. The triggers passed the Star Fox test with flying colors.

So far, the controller was performing better than my aged official controllers had in the last few years. I dare say it was performing as well as the official ones did when they were new. But, for lack of a time machine to go back and do direct testing, I had to push on. It was then I remembered the down-press problem of Yoshi’s Island on the Duo’s controllers and had to return to the land of dinosaurs to make sure everything was well with the buttstomp. I am proud to assure you all that the buttstomp is intact and responsive as ever.

Roaming in eight directions in Hyrule proved perfect. A well-timed dash jump on Spark Mandrill’s stage to grab a heart container worked like a charm. Sabin suplexed that train like it was nobody’s business. The controller passed every test I threw at it. It’s taken many years and many dollars to find a worthy replacement controller, and it’s finally been found. My on-stream testing was all done on an actual Super NES, and later testing on my own was all done on the Retron 5 and, with controller adapters, GameCube and Wii virtual console. It worked like a charm every single time. No latency issues whatsoever. The form factor of the controller is exactly the same as the original, to the point where I wonder if CirKA bought some old Nintendo molds off eBay. It’s almost *too* perfect. The only real complaint is that the membranes are a tad stiff, but those will obviously wear down in time. The CirKA controller certainly gives the original a run for its money, and it really brings peace of mind knowing that an after-market controller just as good as the official one exists now. It’ll never replace my worn original controllers that grew up with me, but at least for a little while, I can finally give them a well-earned rest.