With his recent inclusion in Super Smash Bros. as an assist trophy, I thought it time to finally review the game that the Prince of Sable is from- an obscure and awesome little Japanese-exclusive GameBoy title called For The Frog The Bell Tolls, a quirky take on Hemingway’s For Whom The Bell Tolls. Labeled as an RPG, Frog plays more like an interactive novel with occasional platforming and an ultimately pointless battle system. Don’t let that deter you, though. Frog is quite the charming little game and very worthy of your time.

The story begins with two rival princes, the unnamed Prince of Sable and Prince Richard of Custard, off to save Princess Tiramisu of Mille-Feuille from the invading Croakian Army. What follows is the hilarious story of how the happless Prince of Sable comes to be a hero in his own rite and even earn the respect of his long-time rival. The story makes it known very early on that it does not take itself seriously in the slightest, taking you on a quest to beat up a drunk, get the head of Nantendo’s R&D department some wasabi, and use a mind control device on a wooly mammoth. Really, it’s all over the place, but it’s fun throughout. I don’t want to get into too much detail here as I don’t want to spoil anything for anyone who hasn’t played the game yet, but the story moves along at a wonderful pace and may even have you laugh out loud at times.

While the story is the main offering the game has, it’s carried along by simple but unique gameplay. Battles don’t work like in other RPGs, instead using a turn based hit system based on your max health, shield, sword, and stats you upgrade by finding hidden items. For example, while one enemy may take half a heart of damage from you, you may do one heart’s worth of damage. So, you just go back and forth automatically until one of you falls first. This system is designed to hinder progression, forcing you to explore a little. The exploration itself is incredibly linear, but it works well enough to feel rewarding when you can finally beat a specific enemy now that you’ve found a speed stone, for example. There’s no recourse for dying either, aside from having to backtrack to where you fell, so it’s just a matter of determining what enemies you can and can’t beat whenever you get an upgrade. You’re never hindered for very long though as the game wants you to clip along and progress the story.

Aside from that basic battle mechanic the game is filled with somewhat easy platforming segments, held in side-scrolling caves and the main castle. Sometimes these sections have clever puzzles that may leave you scratching your head, but can be overcome by utilizing the game’s other unique draw: transformations!

Throughout early parts of the game, your character earns the ability to turn into a frog, and later a snake, which each have their own abilities. Frogs can jump high, swim, and eat bugs, while snakes can crawl through tight spaces and turn weak enemies into platforms, and as a human you can push these platforms around. These abilities match up to create some unique platforming puzzles, forcing you to switch between various forms to make it across a gap or to change into, say, a frog to cross a room full of bees that would kill a snake or a human in just a single battle. It may be unique but overall the game’s a pushover when it comes to difficulty.

Where Frog fails to deliver in compelling gameplay, it more than makes up for with its story and how it’s presented. It’ll only take four or five hours to plow through it but by the end, I can guarantee you’ll be smiling and humming the overworld tune. In the end, it’s just a fun little way to spend your time, and isn’t that what gaming is all about? Now go import the cart, slap the translation patch on your Retron5, and go collect that wasabi on Nantendo Island.

tl;dr: 8/10 – Gameplay may just be going through the motions, but the story and presentation really make this ‘game’ shine. Totally worth it. 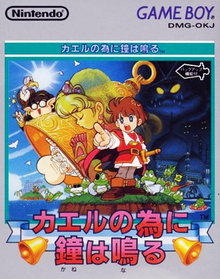